Hi everyone!  I just came across a long interview with Terry Gross from Fresh Air! on NPR.  I love listening to Fresh Air! Even if you have never heard any of Terry Gross’s interviews on Fresh Air!  this is a really interesting piece. The interview was with David Marchese and posted on The Cut:  Terry Gross, A Conversation 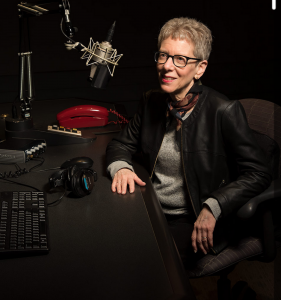 “Fresh Air’s Terri Gross began producing and hosting Fresh Air in 1975, shortly after being asked by former WBFO program director David Karpoff to come work with him at WHYY in Philadelphia. The show became nationally syndicated by NPR in 1985, and now reaches in the neighborhood of 5 million listeners every week. To date, Gross has conducted more than 13,000 interviews.

For more than 40 years, you’ve been in very unusual position of asking very intimate questions about the work and lives of people you don’t really know. What has doing that over and over and over again taught you about yourself?
That’s hard. I’m not exactly sure I can enumerate what I’ve learned. It’s like you’re slowly being changed every day by doing this job. I have learned, though, that everybody is insecure and everybody is troubled. Even incredibly talented people have deep insecurities. Maybe this is perverse, but I find that idea comforting. It helps me cope with my own stuff.

I’m probably just revealing my own neuroses here, but it sure seems that when people are presented with two pieces of information — one negative and one positive — the negative one almost always gets a lot more attention.
That’s exactly my problem..

What’s the function? (of an interview)I like to quote John Updike on this. In his memoir, Self-Consciousness, which I really love, he said he wanted to use his life as “a specimen life, representative in its odd uniqueness of all the oddly unique lives in this world.” That’s kind of how I see interviews. When you’re talking to an artist, you can get insight into the sensibility that created his or her art and into the life that shaped that sensibility. I love making those connections. I think we all feel very alone. I don’t mean that we don’t have friends or lovers but that deep at our core we all have loneliness.

And want connection.
Yeah, we want connection and sometimes when you’re talking to an interviewer who you trust, you can speak in a way that’s different than the way you talk to friends. You can reveal more. Not always, but sometimes.

So what need did Fresh Air fill in your life? Why did you want it so badly?
When I was in high school I wanted to write. And when I got to college, I still wanted to write but I was discouraged really quickly because, well, I had two freshman English teachers, and one of them thought that something I wrote was really great. He said something like, “This is the kind of language that can shatter.” My heart swelled. I was so excited. But then my other teacher said, “Okay, for your assignment, just write something and bring it in.” And I thought, Write what? I don’t have stories that just come to me. So I went up to this teacher after class and I said, “I don’t know what to write about.” He looked at me kind of smirky and said, “Write a love story.” I thought, That’s about the last thing I’d write. He’s just saying that because he thinks women should write love stories. He’s not the type who’d be reading love stories probably. It was so dismissive. I was discouraged really easily, I guess. But, also, I just didn’t think I was good enough to be writer. I didn’t feel desperate enough to pursue writing, but I desperately wanted to pursue something that I could be passionate about and when I stumbled into public radio, I found that thing.

How does your work spill over into your personal life? And I mean more from a psychical rather than practical perspective. How does having deep conversations day after day affect you?
Okay, one of the things I’ve learned how to do on the air is make people stop talking. Some people can go on for seven minutes without a breath. At some point, you have to interrupt them and explain, “This is radio. We need to take breaks. We have to have, say, two-minute answers, or else we’re only going to be able to ask about three questions.”

I just asked about how your work spills into your personal life and you gave an answer that was only about your work.
Oh! I’m not going to make the case that I’m a great interviewee! I wasn’t intentionally avoiding the question. I was just going on a tangent.

Maybe you were unconsciously avoiding it.
No, no. I’m happy to address the subject. What I was saying actually connects to your connection. In real life, you’ll run into someone on the street and say, “Hi, how are you?” and seven minutes later they’re still telling you. So I’ve gotten practice with asking people in a nice way to stop talking. Some people act like they’re a late-night radio host alone in the studio and they’re rapping out loud to an audience that has no ability to talk back. I don’t want to be in that audience. I want people to talk with me, not to me.

Ellen: I love the emotion that comes through in this interview:

“…everybody is insecure and everybody is troubled. Even incredibly talented people have deep insecurities.”

“I would totally dismiss the “favorite thing to listen to” part. I’d think that was just their way of cushioning the blow that yesterday’s show was terrible.”

“I desperately wanted to pursue something that I could be passionate about and when I stumbled into public radio, I found that thing.”

I did not get permission to copy the interview, or to post these excerpts…

Ellen:  I am busy writing a script for 2 presentations for It’s Sew Easy on PBS TV.  I hope my scripts show passionate I am about sewing, and teaching other people how to make glorious clothes.  I hope my script feels like I am talking to the viewer, not at them. And finally, I hope my insecurities at being taped for video don’t come through!